Wow … what a day, what an experience.

It was three months ago, I saw this advertisement about Sake Recipe Competition.

The notice must have been out there for a while but when I saw this poster it was just a week before the deadline. The applicant had to create two recipes, one in savoury and one in sweet by using Gekkeikan ‘Sake‘ (Japanese Rice Wine) which should not be a Japanese Dish. Developing two recipes in a week seemed rather hard but I tried anyway. Then right after New Year’s Day I received an email saying that I was shortlisted for the final! They said that six finalists were selected from over one hundred applicants. That sounded pretty impressive.  😀

However, I faced the first problem … The contestants had to cook the dishes in the final day and serve them to judges. I submitted a baked dish but there was no oven at the venue! I had to develop some other dishes which you didn’t need to use an oven. I had tried several dishes but was not happy with them. And then one week before the final day I was told that I could bring a small oven if I wanted. Great! So I decided to stick to my original idea but had to adjust the recipe a little for making it suitable for cooking in a small oven.

The final stage of the competition took place at Ichiryu Udon noodle restaurant last Sunday (the 24th January). But there was a bigger problem waiting ahead of me…

In the morning on the final day I did not notice that the venue had been changed to a different location and I went to the wrong place. I phoned the organiser to get the correct address and managed to get to the right venue eventually but it was about 40 minutes late. By the time I arrived there all the other contestants had already started the preparation and cooking their dish. I could not lose any more time and I had to go into the professional kitchen straight way! 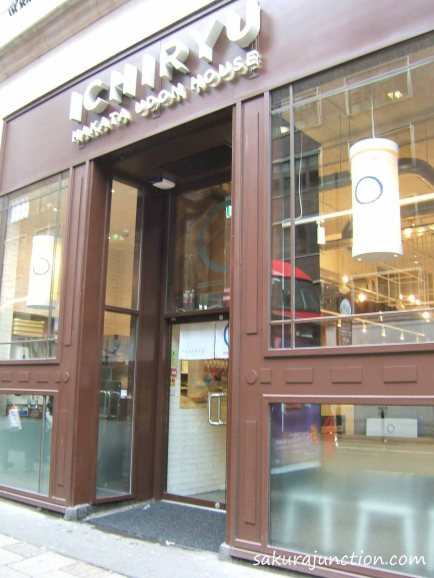 So, naturally I was the last person to serve dishes to the judges. To my big surprise I managed to cook and serve right after the fifth contestant without much delay. This was a huge relief to me.

So what were my dishes? 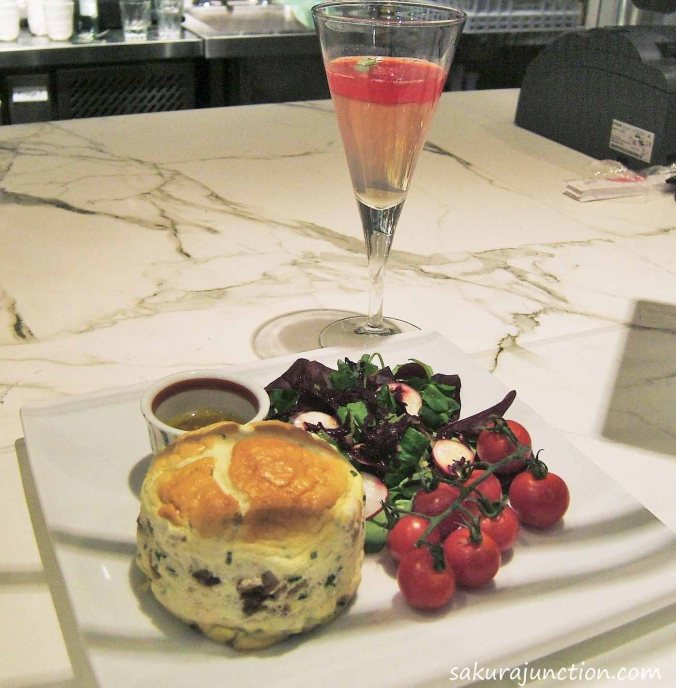 My savoury dish was ‘Sake Soufflé Quiche with Fig & Pine Nuts’ and the dessert was ‘Rosy Sake Jelly with Raspberry Sauce’. The dish was judged from 1) Taste, flavour and texture, 2) Presentation and 3) Presence of aroma and/or flavour of sake. In the presentation I tried to do a little witty. I don’t know if the judges noticed but I used ‘Ochoko‘ (a small cup for drinking Sake) on a plate as salad dressing container and a wine glass for my Jelly dessert. The theme of my dishes was “Sake for Eating”.

Five judges were Toshihiko Sakaguchi (Director General of JETRO London), Rie Yoshitake (Sake Consultant of Sake Samurai), Anna Greenhous (Sake Journalist of Harpers), Yukimasa Noda (GM of International Div and Gekkeikan Sake Brewery) and Kanji Furukawa (Chief Executive Chef of SHORYU & ICHIRYU). They were tasting my food whilst I was explaining about it and that was followed by short Q&A. Honestly the dishes by all the other contestants looked very different and professional. I was happy that I finished cooking and provided the dish as I wanted although I arrived there so late.

All the dishes by contestants displayed at the counter

Panel of Judges in Action

After about 30 minutes of discussion by the judges the announcement of the winner started about 1pm.

It started from special ‘Gekkeikan Prize’ and then ‘the Third Prize’. My name was not called this stage. Well, never mind.  Then, the Second Prize was announced …

It was me! I got the Second Place and the prize was “Two days Certified Sake Sommelier Course at the Sake Sommelier Academy”. Wow, that was amazing! I always wanted to learn about ‘Sake’ so it is brilliant.

After the announcement of winner people were tasting all the dishes

I went through so many problems during this process but it was a happy ending. I am so pleased the result especially after going through the trouble in the morning?! So I was very happy indeed when I left the restaurant.