There was a wonderful event in London about two weeks ago (the 18th – 21st January) called ‘Lumiere London’. This was a festival of Lighting displayed in the public space in central London. I went into town and took lots of photos so I would be able to share the experience with you all. However, straight after that event, Bang!! I got the flu… I don’t catch a cold very often so this flu germ must have been a super strong one. Somebody in the audience gave it to me. I gargled to spit out the germs and washed hand as soon as I got back home but two day after the day I became ill with a high temperature with aching muscles and stuck in bed for a week.

I apologise for the delay of posting these photos but because it was a very interesting event I would like to share the photos with you here.

The event ‘Lumiere London’ was the open viewing art works of 50 lighting works by different artists in public space. The venues were spread out in several areas in Central London. The area I went to see first was in Westminster. 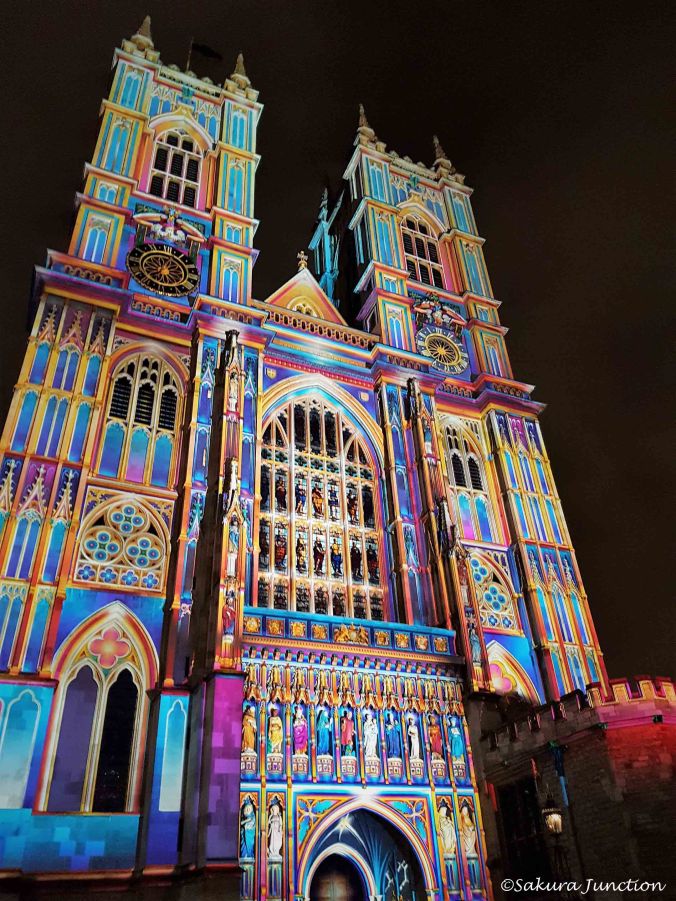 This was one of the major art works for this year’s event. The lighting was done in two entrances. The light of the main entrance changed from time to time. There seemed lighting from inside as well so the stained glass rose up clearly to emarge with the outside lighting. The unusual colour choice of lighting for a cathedral was great too. 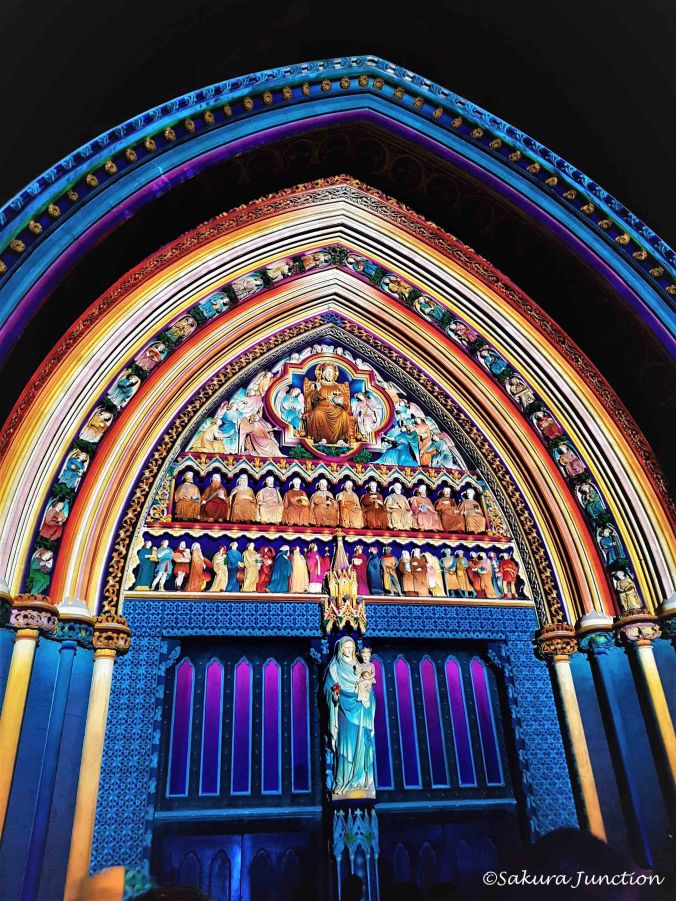 From the Westminster area I crossed the bridge and went to the South side of the Thames. 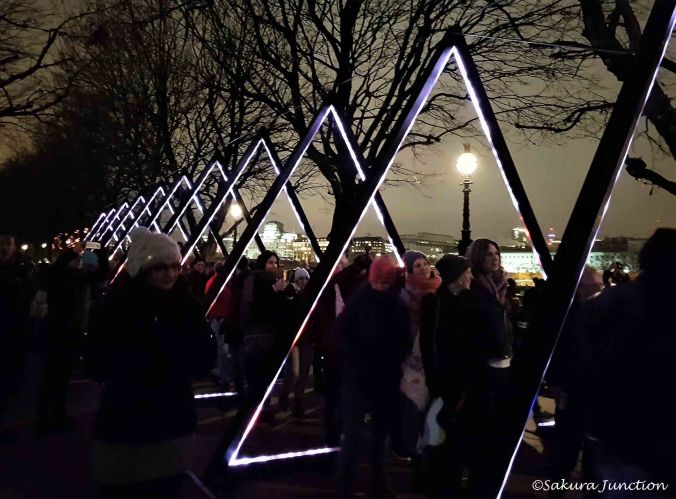 This one was great. In the air of this normally busy junction a hude ball was floating to project images. The rode was closed and packed with the pedestrians only for the evenings.

This was a rather quiet display in the garden. A bird shape was glowing high above us in a tall tree. Because it was done with a single white colour lighting, some kind of spookiness was created and that was creating a great atmosphere.

The moving image was projected onto a massive building on Regent Street and Piccadilly Circus. 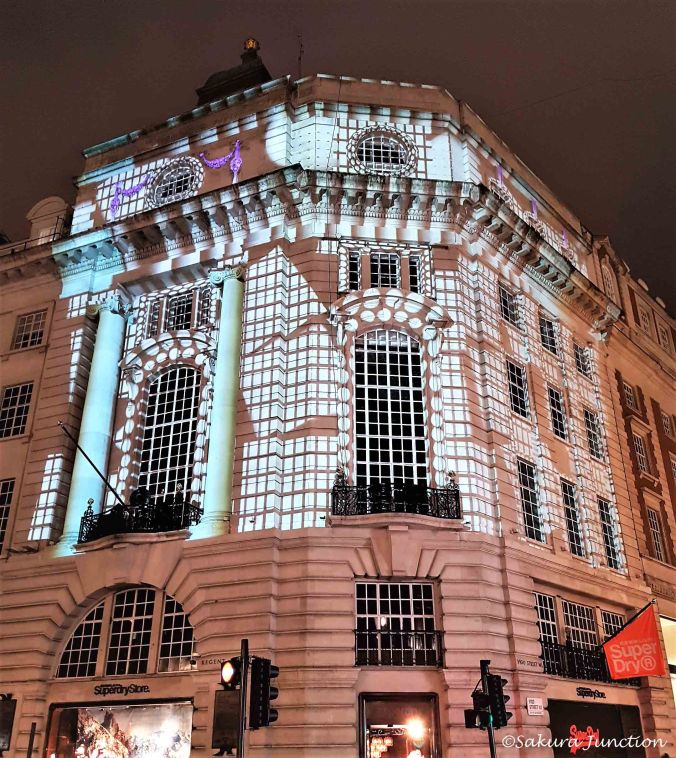 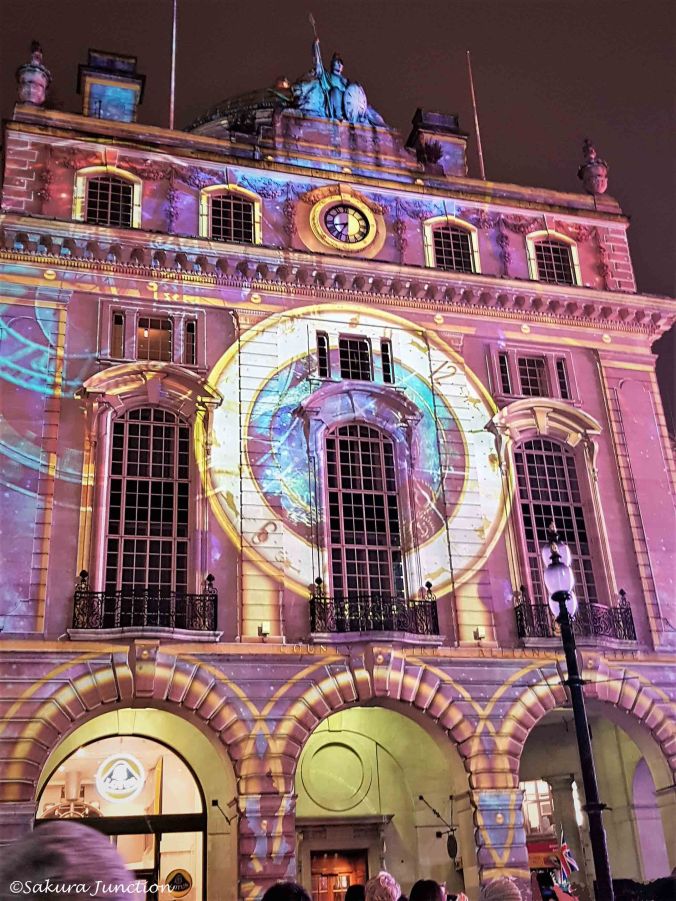 Many lighting installations were coordinated with sound and music and one of them which went down well was displayed at Trafalgar Square. 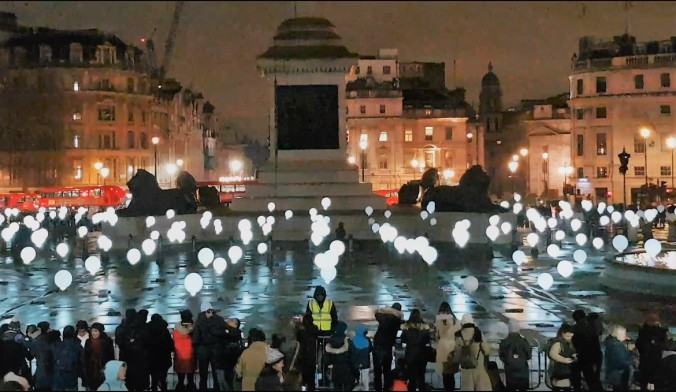 I wanted to add a video of this instllation at Trafalgar Square but it seems like my Blog setting does not allow me uploading my own video so please imagine the atmosphere with this photo. 🙂