Last year I entered to a Sake recipe competition for which I had to create two Non-Japanese food recipes, one savoury and the other a dessert. To my surprise I went through to the final that was held in London in January. More surprisingly I won second place among 6 finalists. I have posted about this event and what happened to me on that day.

At the end of that event I was given some vouchers. That was great but that was not the main prize. The prize for the second place was “Two Days Certified Sake Sommelier Course” by the Sake Sommelier Academy. Although there are more and more people interested in Japanese alcohol ‘Sake’, the course runs only 2-3 times a year. So I had to wait to attend the course until the next one would be held in London and that was last week. So finally my waiting was over!

The course was held in a hotel room in the Knightsbridge area in London by the Sake Sommelier Association. There were 14 attendants to the course who are all professionals in Food/Drink and Hotel industry including some people who are already Wine Sommeliers. Many of them were from Europe (France, Spain, Italy and Portugal) and two people came even from North America. I know Sake is getting popular but I really didn’t think people travel that far to learn about Japanese drink and become a sommelier. I was impressed.

This course is one level above the introduction course so it had quite a tight schedule covering lots of topics in the curriculum. We started studying from ‘History of Sake Culture’ and ‘Sake Production’ followed by many other subjects related Sake.

Recently I attended an introductory Sake seminar so I know the basic things about how Sake is made. This course made me gain further knowledge and details in Sake production.

On the first day after lunch we started having a tasting class beginning with some pure flavours in a spoon then moved onto Sake. 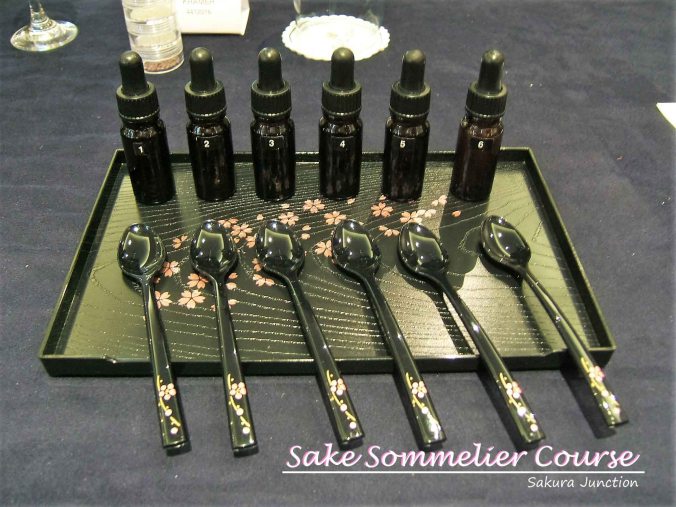 In Sake Tasting we have to see its colour, scent, flavour, dry/sweetness, body etc. I have to say that I found it is quite difficult to describe each Sake in words. The smell and flavour is much subtler than wine. I also thought it might be harder for me than some other attendants because, as I’m a Japanese, I have been drinking Sake longer than other people so already used to the taste. I was impressed that some people could pick up and discribe faint scents and tastes so well but in the end I learned that you just need to say whatever the flavour it is which popped into your mind because all the smell and flavour is coming from your own memory. Each person has a unique experience and nothing is wrong. 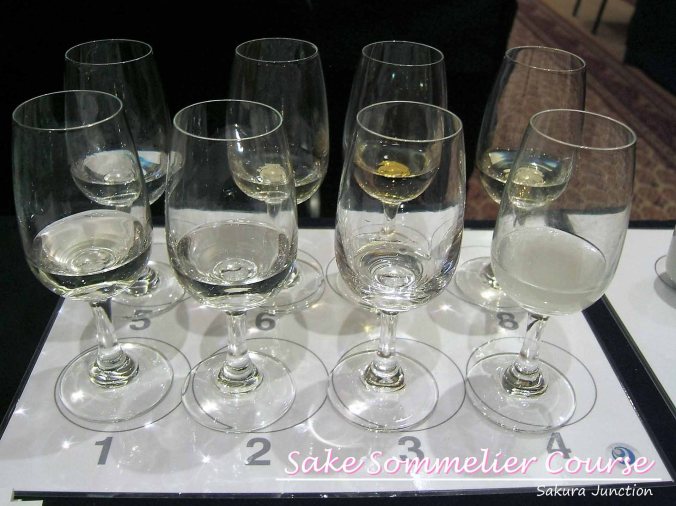 At the end of the second day the exam was waiting for us. It was composed of mainly multiple choice questions in the knowledge from the classes over the two days, some tasting and writing a little essay. Most of the questions were fair and what I expected to be asked but some gave me a quite surprise.

After the exam ended we had to wait for a while till the organisers started to call out each attendant and tell us if she/he passed. So how did I do? Well, I passed! 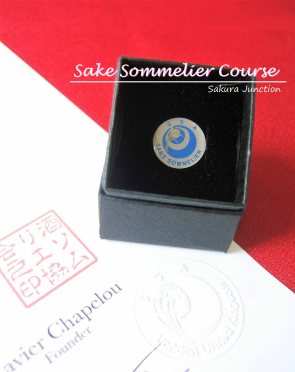 I received the certificate and the badge of the Sake Sommelier by the Association. Hooray! I believe everybody in my class passed. It was a great bunch of people from many different countries.

The final part of the course was a ceremony called ‘Kagami-Biraki (鏡開き)’. The girl who is the Young Sake Ambassador in 2016 opened the barrel by hitting the top of it with a wooden mallet. We cerebrated our successful study and future as a great sommelier with an ‘o-choko (glass)’ of Sake.

As a part of understanding sake labels we were taught even some Japanese words and writing such as ‘純米’, ‘大吟醸’ or ‘本醸造’ (‘Junmai’ ‘Daiginjo’ and ‘Honjyozo’ respectively). We also had to memorise the names of sake rice like ‘Yamadanishiki‘ and ‘Gohyakumangoku’ all of which are very long words. I believe that it must be so confusing and hard for westerners. I know Japanese food and drink are becoming very popular but I have to say I appreciate all the interest they have in our culture.

I am so glad that I was given this opportunity to become a certified Sake Sommelier. As a Japanese person who is in a Food industry it is the right direction to go in. I hope I will bring this new skill into my food knowledge and create some new and interesting ideas soon.