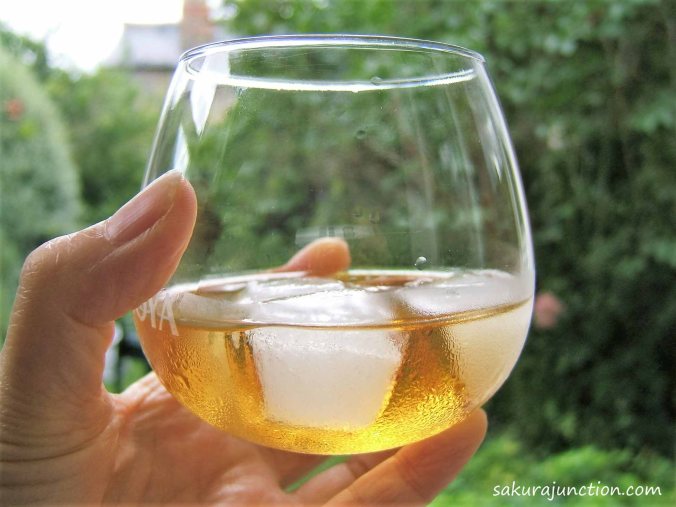 There are several types of alcohol in Japan. Two most well-known ones are ‘Sake’ (Rice Wine) and ‘Shochu’ (Spirit made from materials such as rice, wheat or sweet potatoes). We also have some liquors and the most popular one is ‘Umeshu’ Plum Liquor. I like Umeshu. Although it is an alcoholic drink I have been familiar with it since I was a child. My mother used to make it at home with fresh ‘Ume’ plums. It is very refreshing having it on the rock, neat Umeshu with some ice cubes especially after having a bath in summer. You wait a little until the ice starts melting and dilutes the Umeshu a little then you drink it. Aaaaaah, so heavenly.

Recently I had a chance to attend an ‘Umeshu’ seminar. I loved to find out more about my favourite drink.

The seminar was held at Shoryu Ramen restaurant in Piccadilly Circus, London. It was hosted by Japan Centre and Choya, the biggest Umeshu company in Japan.

The lecturer was Mr. Suzuki from Choya who had just landed in London on the same day. It was great that he incorporated a quiz into the seminar. He explained some facts regarding the Umeshu and gave us questions. 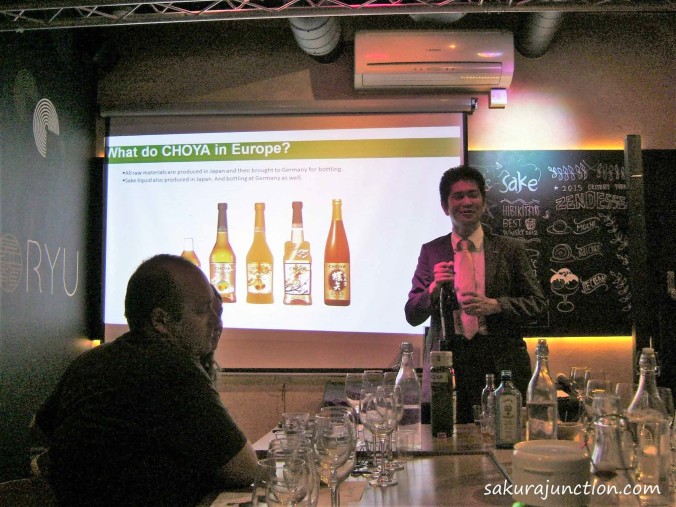 Because I knew how my mother was making Umeshu, I know its production side but one particular fact that I had never questioned myself was “Where the Umeshu’s flavour comes from?” We had to choose an answer from 1) stone, 2) seed or 3) flesh of a Ume fruit. Can you guess the answer?

I had Umeshu so many times in the past and had never wonder about it. I was thinking the answer to this question whilst tasting it. I realised it was not just fruity taste and it had almond like tanginess. So, in my head I was thinking  “Almond = cyanide, which means ….. seed???”.

The correct answer was … 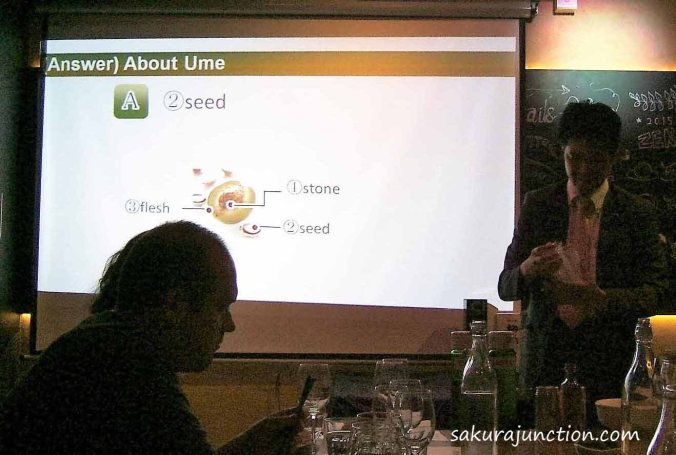 I was right. Some people might be shocked to hear what I just mentioned, but there is cyanide in seeds of many plants. Yes, that cyanide which is highly toxic. The famous foods with cyanide in seeds are apples, plums, elderberries, currants and almonds. Don’t worry there is not that much quantity in each seed to kill you. You don’t die by eating those seeds. However, only seed you should be careful about is almond. Probably almond contains quite a lot of cyanide so you should not eat too many all one go. Basically the almond flavour is cyanide flavour.

Whilst we were doing the Q&A we were served some foods to match their different types of Umeshu products. First dish to come was ‘Yakitori’ Teriyaki Chicken. 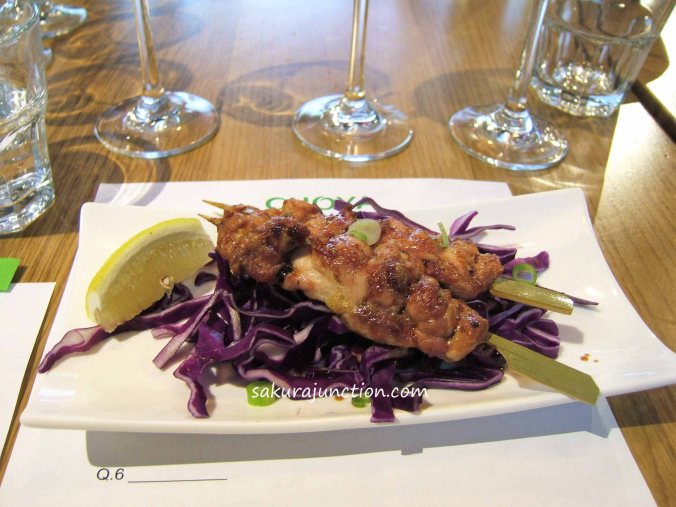 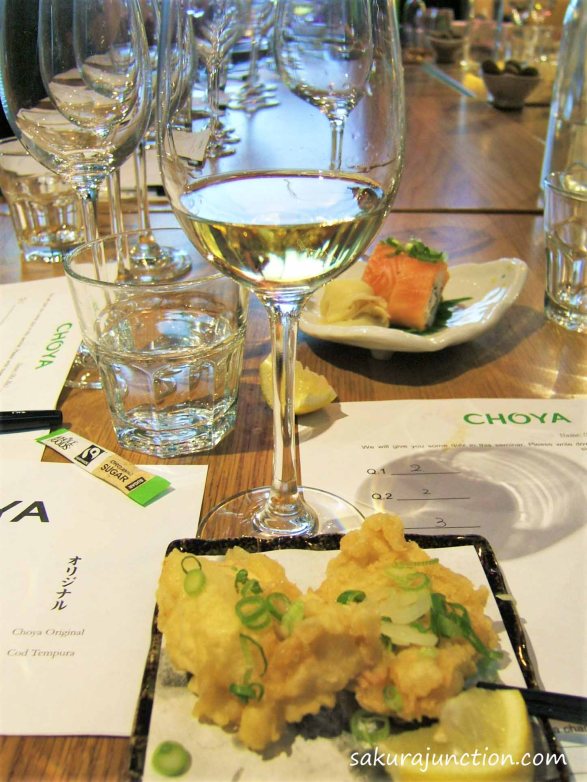 For their Umeshu in Dry flavour Salmon Sushi Roll with Cream Cheese was matched. 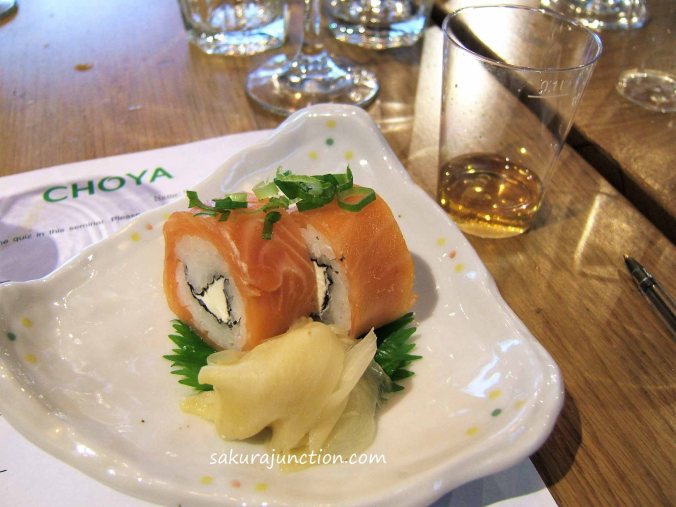 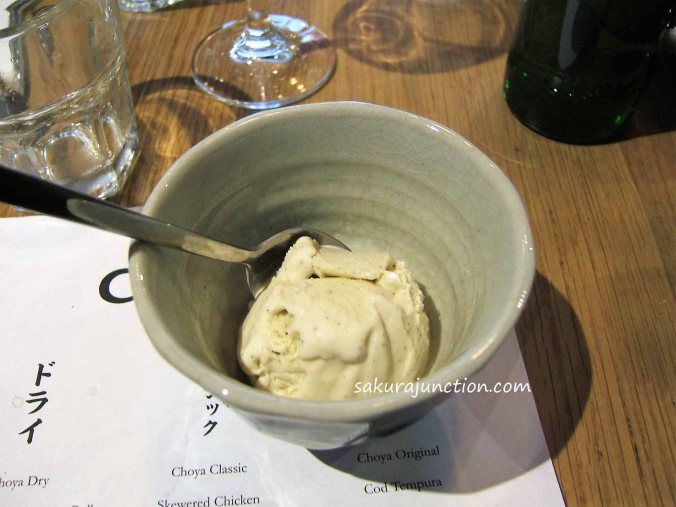 We made a cocktail using Umeshu and Gin and added a Plum that was used for making the liquor. It was very tasty. What I made a mistake was that I had forgotten that Umeshu itself was an alcohol (15%). Soon I realised the cocktail was quite strong. 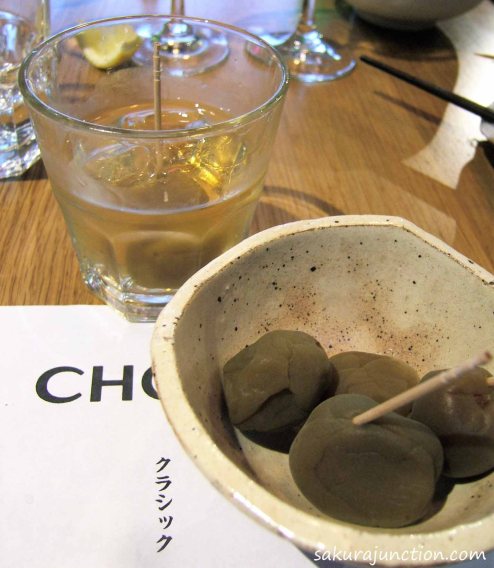 Oh, we had the result of the quiz at the end. There were 6 questions in total and there were 3 people who got 6/6 questions. One of them was me. Because three people tied the score we had to go to an extra question. Unfortunately I could not get the correct answer for this round but I was given a gift of Choya Umeshu and a glass to take home. 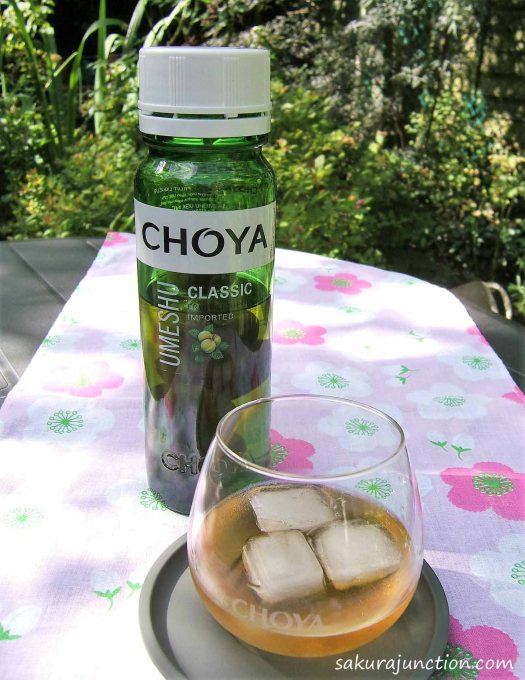 A great result from a great seminar. 🍸Cheers!    😉