Have you been to Japan? Where did you visit? I am sure one of the places you’ve been in Japan must be Kyoto. Everybody loves visiting Kyoto. It is the old Capital City of Japan with lots of temples and Shinto Shrines. You find old fashioned shops standing on narrow stone paved path. You feel like you’ve been Time slipped into 200 years ago.

There is lots of famous food in Kyoto. One sweet many people buy when they visit Kyoto is ‘Yatsuhashi (八つ橋)’. It is a Mochi type of sweet with Cinnamon flavour either soft (Nama-Yatsuhashi) or baked hard. You might think Cinnamon is very western spice but I believe we started using Cinnamon quite a long time ago. It came from China and it still has the Chinese name ‘Nikkei/Nikki‘ as well as the western name.

The famous soft type Yatsuhashi is normally cut into a square shape and folded into a triangular by wrapping sweet Bean Paste inside. The spicy scent of Cinnamon is very appetising and it goes well with Tea or Coffee as well as Green Tea.

I made my version of Yatsuhashi in a slightly western appearance.

Since the huge demand for Mochi sweet continues at Wasoukan Cafe, I made the Yatsuhashi sheet slightly thicker than tha traditional way in Japan.

The outer Yatsuhashi is a Mochi type of sheet with Cinnamon powder and ‘Kinako (toasted Soya Bean powder)’ wrapping sweet Azuki Beans paste ‘Tsubu-An‘ and decorated with some White Bean paste ‘Shiro-An‘. I also added a ‘Sakura‘ 🌸 Cherry Blossom shaped Mochi on top as the sign of my creation (You know, we are ‘Sakura Junction’ 😀 ). 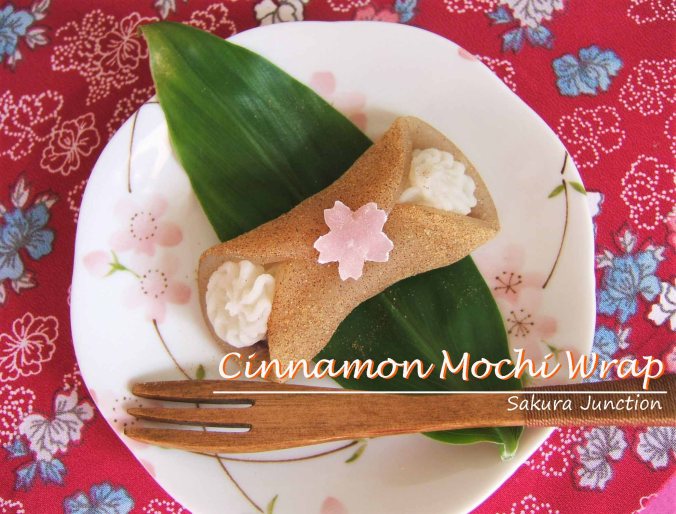 It is free from Gluten, Egg, Dairy & Oil.

This “Cinnamon Mochi Wrap” has been served in Wasoukan Cafe in Notting Hill, London during September.

2 thoughts on “The Taste of Kyoto: Cinnamon Mochi Wrap （八つ橋ラップ）”