This Sunday, the 7th of July, is a special day called ‘Tanabata’ in Japan. It’s not a national holiday but it is the day that everybody hopes to have good weather and looks up at the sky in the evening. It came from the ancient story that a young loving couple was forced to live separately each side of a river by the God. It was because they loved being together too much and neglected their work. However, the God saw that they were too saddened about the fact that they could not see each other anymore, he gave them permission that they could cross the river to meet once a year if the weather was good and the sky was clear. That one day they are allowed to see is the 7th of July. It’s an ancient story which was supposed to be happening in the sky. The lovers were actually stars and the river was the Milky way. I mentioned this story in more detail in the past so if you are interested to know more, please visit my old post of Tanabata with Cosmos sweet.

So the Tanabata day is coming tomorrow. It is known as a Star festival and a wishing day in Japan and there are some places having a festival too. Last year I made the Bamboo Japanese sweet for this occasion with ‘Sasa’ Bamboo leaf shaped sweet and the red and yellow wishing paper strips as decoration. I was wondering what sort of sweet I should make for this year’s Tanabata day. I wanted to make something quite different.

This one is my Tanabata sweet this year.

It’s composed of two parts that are made with different types of sweet. The bottom part is called ‘Mizu Yokan’ which is meant to be the Earth. It is made with Sweet & Smooth Azuki (Red) Bean paste gathered with a tiny amount of agar. It is a delicate sweet which contains quite a lot amount of water but with agar it becomes a slightly jelly-like texture. It is a very refreshing sweet and people prefer to have it chilled during summer time.

The top part is jelly-like clear dome which is meant to be the Galaxy with a star and planets inside. 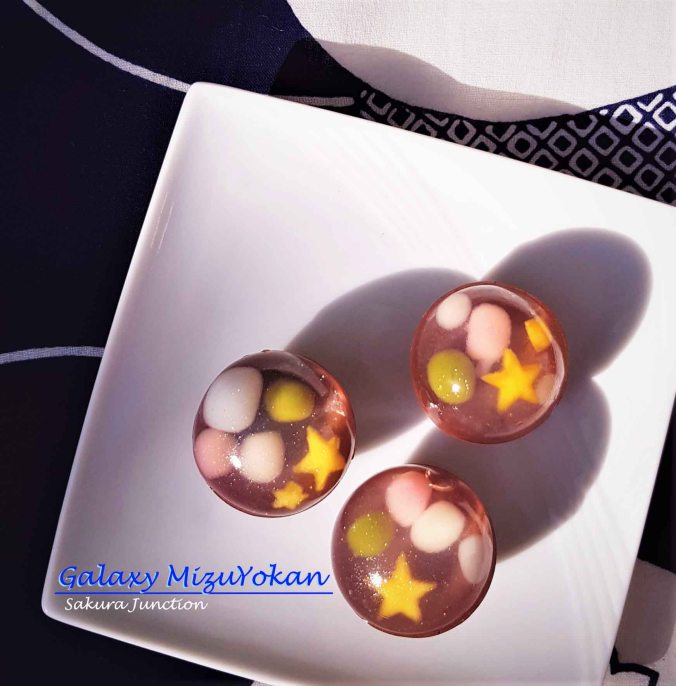 The planets are tiny ‘Mochi’ in several colours and stars are Mango. I also added some gold and silver glitter so it sprinkles when when it gets some sunlight. 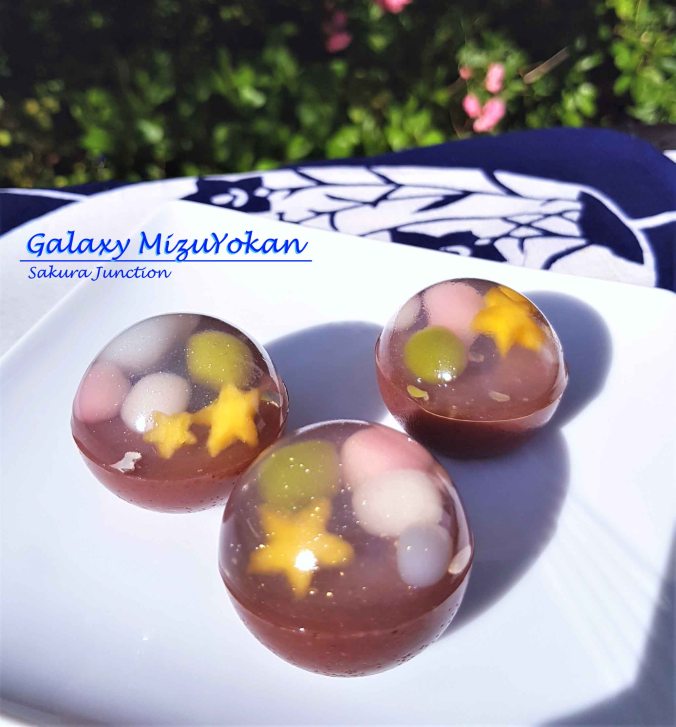 The sky is cloudy now in London and it seems like we are going to have a little rain later today, but let’s hope we will have a clear sky tomorrow for the star couple!