Comparing to the snowy weather three weeks ago it is so much more like spring now. It is not just because the temperature is higher but because the sunlight is brighter and the air is lighter. Although the forecast says there is a possibility that this weekend might become cold again, the season always moves forward by going back and forth a little. It means we are definitely getting closer to spring!

It means we are in Early Spring now. I quite often design sweets depending on which season we are in. I pick some significant signs of the season such as colour, flower or mood of the season. So what is early spring like for me? It is the season some leaves start to come out (Green) on a tree and field, but in some area it is still covered with snow (white). It is a little too early to see a view of full Sakura cherry blossom in the most places, however, but in some warmer area some trees probably starts blossoming (Pink). The smell of early spring is a grassy green smell. So what I have to do after running my imagination is put all these images together.

I needed to assemble all the elements of green, white and pink together. I was imagining a mountain in early spring. For autumn season I made Autumn Mountain Mochi and reached up to this swirling sweet of early spring version of the mountain.

The main part of this sweet is soft and smooth plain ‘Mochi’ as the base. Mochi is a rice cake which is made mainly with rice powder and sugar. In order to maximize the flavour of the main ingredient the base element has to be plain. 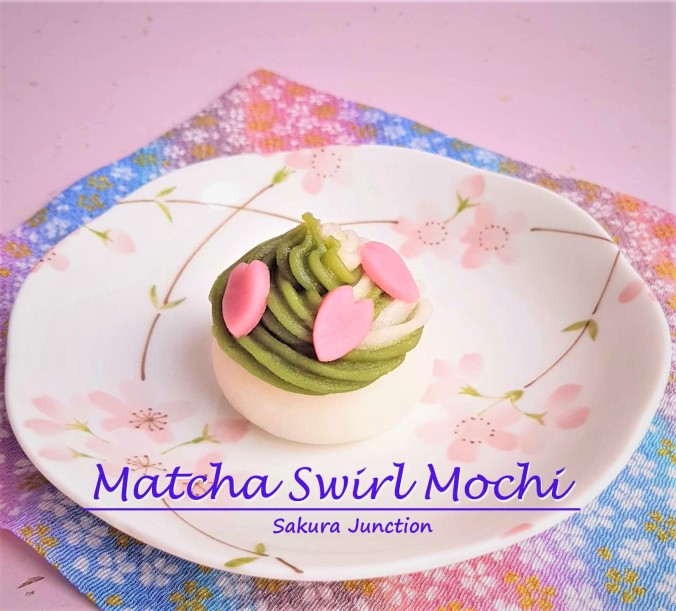 The main flavouring ingredient is ‘Matcha’ Green Tea. I wanted to express the image of a mountain by creating the shape as a swirl and used the plain sweet white bean paste and the bean paste with Matcha Green Tea powder half and half.

As a reminder that a spring is coming I decorated the sweet with some Sakura cherry petals on top.

This sweet is Free from Gluten, Dairy and Egg.

This ‘Matcha Swirl Mochi’ is served at Wasoukan Café (Notting Hill, London) until the end of March. Hope you like it. 😊