Oh, No! It’s already middle of December! The final month of a year. We have only two weeks before the brand new year starts. The time seems to pass more and more quickly every year. Is it the sign of aging? It has been quite a mild winter so far, but now the weather has become wet and cold which is the typical winter in England. Before it became this wintery weather I received an order of my sweets for a Tea & Sweet Tasting event held at a Tea shop My Cup of Tea. The tea shop ordered two types of ‘Wagashi’ Japanese sweets, so I decided to make one ‘Nerikiri’ and the other ‘Mochi’. I wanted them to be something pretty and also in autumn colour.

This is one of the sweets I made for this Tea & Sweet Tasting event order. Yellow Ginkgo ‘Icho’ and Red Japanese ‘Momiji’ Maple leaves are the most significant autumn colour so I thought serving sweets in Ginkgo design would be perfect in November. The sweets look quite similar to the sweets I made last year. Last year’s one was made with a different type of Japanese sweet pastry ‘Nerikiri’ which is easier to create shapes, but the sweets I made this time were made of ‘Mochi’. 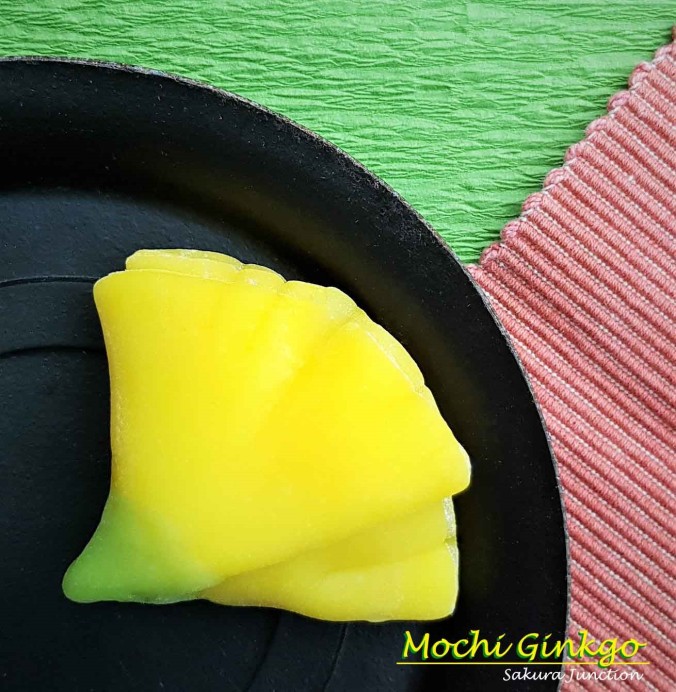 The outer layer of this sweet is made of ‘Mochi’ which is also known as Rice cake. Mochi is very sticky and gooey. This is the special texture that lots of people have started going crazy about lately. Because of that texture it was a little trickier to make a shape than when I was using Nerikiri, but I hope I managed to capture the Ginkgo leaves image?

I used the Mochi in two colours and created a gradation to express that this Ginkgo leaf has been changing the colour from green to yellow but the last bit of green colour is still staying in the deep autumn.

I selected Sweet White Bean Paste as the centre filling of this Mochi sweet. This is because it was for the Tea & Sweet Tasting event to serve to the people who were not familiar with Japanese Tea and sweets, so I wanted them to taste the most traditional flavour first.

The Tea shop My Cup of Tea seems to hold many interesting events from time to time. If you like to find some new skill you should keep an eye out on their site.

4 thoughts on “Mochi Ginkgo and the Sweets Order”